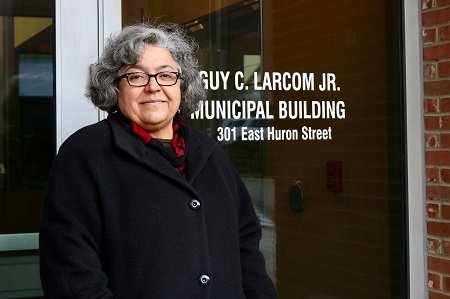 You can read the entire article at: https://www.mlive.com/news/ann-arbor/2019/12/anti-israel-activist-and-environmentalist-running-for-ann-arbor-council.htm

ANN ARBOR, MI — After many years of speaking out before City Council, Mozhgan Savabieasfahani is eyeing a seat at the table.
The Ardmoor Avenue resident publicly announced her campaign this week, vowing to challenge 4th Ward incumbent Jack Eaton in the August 2020 Democratic primary.
An Iran native, Savabieasfahani has regularly demonstrated before council, decrying the killing of Palestinians by the state of Israel and calling on council to pass resolutions to boycott Israel and to call for an end to United States military aid for Israel.
Savabieasfahani, an environmental toxicologist who does grant-funded research internationally, also is frustrated about what she considers a lack of progress on addressing threats to the city’s drinking water supply, including the Gelman dioxane plume and PFAS.
She’s been regularly attending forums and speaking out about those issues…
It’s time to “put the shovel to the ground and clean it up now,” said Savabieasfahani, who wants to put a property tax proposal before voters to fund an aggressive cleanup…
You can read the entire article at: https://www.mlive.com/news/ann-arbor/2019/12/anti-israel-activist-and-environmentalist-running-for-ann-arbor-council.htm 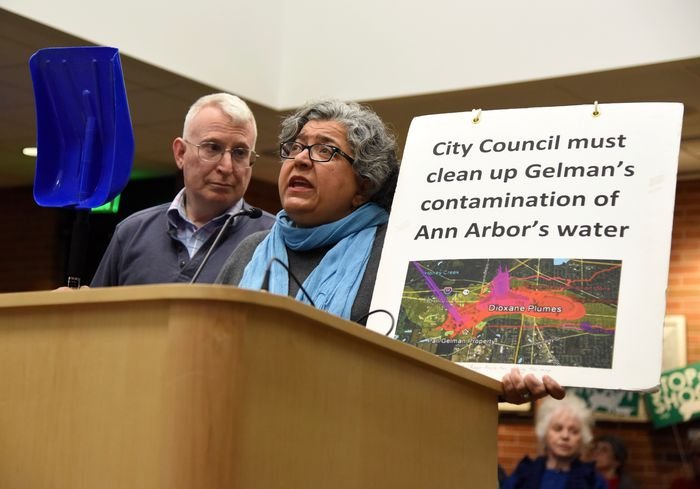 Dr. Mozhgan calls upon city council to immediately act and clean up the Gelman dioxane contamination

WATCH Dr. Mozhgan leads the way on a $15 an hour minimum wage for all of us

ANN ARBOR, MI — Should Ann Arbor officials push for a citywide minimum wage of $15 an hour? The question has come up this election season with the issue raised in a three-way City Council race in Ward 4. Mozhgan Savabieasfahani, who seeks to unseat...
Read More

Dr. Mozhgan has petitioned Ann Arbor City Council for a resolution against military aid to Israel.

Dr. Mozhgan fights against racist exclusionary zoning; wants good housing by the public and for the public.

Dr. Mozhgan calls upon city council to immediately act and clean up the Gelman dioxane contamination 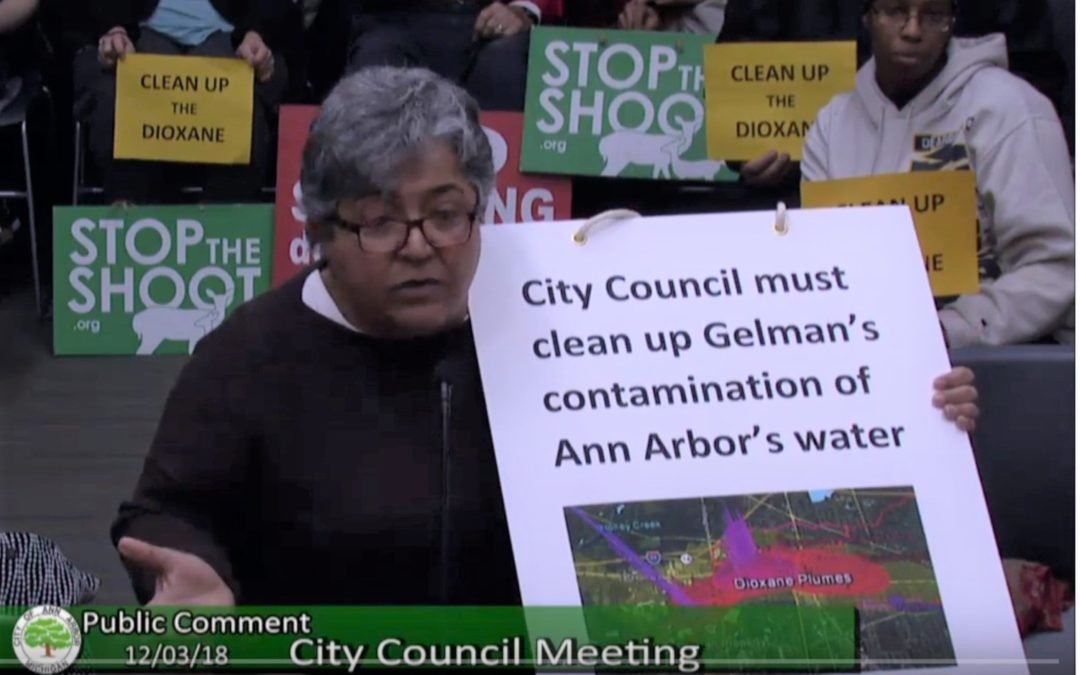 Regarding: DC-1 19-1887 – “Resolution Supporting the Environmental Protection Agency’s Active Involvement with the Gelman Site and Encouraging its Listing of the same as a “Superfund” Site”
Your vote, wishing for a “Superfund Listing” of the Gelman contamination site, and its eventual EPA cleanup, is only a wish.
Fifty years of City neglect has allowed the dioxane contamination of our waters to become the largest in the world. Now, at a time when the whole structure of the U.S. EPA is being purposefully dismantled, Ann Arbor City Council tells us to pin our hopes on Trump’s dying EPA?
After 30 years of doing nothing, now you are trying to put the Gelman dioxane contamination on a fading Superfund list? That is, at best, wishful thinking.
The EPA’s pitiful record speaks for itself. That record shows that it will take decades for sites already on the Superfund list to be cleaned up. Some Superfund sites have languished on that list, uncleaned, for 20-30 years.
Source: https://www.pbs.org/newshour/show/hundreds-of-toxic-sites-await-cleanup-under-superfund-program
Even in the best case scenario, assuming the City somehow gets the Gelman dioxane contamination site on the Superfund list, it will still take decades for the EPA to start working on it.
Are we to wait another 30 years for an EPA cleanup of the Gelman contamination?
Look at the EPA’s record:
Since passage of CERCLA in 1980, more than 1,700 sites around the U.S. have been listed on the Superfund National Priorities List (NPL). Since then, only 23% of sites on the Superfund list have been fully cleaned up.
Source: https://www.greenbiz.com/article/us-superfund-sites-offer-lessons-future
This is happening as the Trump Administration is drastically slashing the EPA’s enforcement and compliance staff:
Source: https://prospect.org/power/epa-rollbacks-hurting-americans-live/
This is also in a context where the Trump Administration just shut down public access to its ToxMap. For many years, ToxMap allowed users to pull up detailed EPA data for each toxic release site, and to overlay other information, such as mortality statistics, onto those maps. And it’s precisely those capabilities that earned Toxmap a devoted following among researchers, students, activists, and other people keen to identify sources of pollution in their communities.
Source: https://www.motherjones.com/environment/2019/12/why-is-this-federal-pollution-tracker-shutting-down/
In the 7 long years that Mr. Eaton has been on the Council, the Gelman contamination could have already been cleaned up. But, the contamination has only grown during his tenure.
It is outrageous that in such a grim atmosphere, the best Jack Eaton can do is to offer us, the people of Ann Arbor, a useless resolution (DC-1 19-1887).
That resolution is no more than a mirage, a wishful proposal that means waiting decades longer for a potential cleanup of our environment by Trump’s EPA.
It is time, long past time, for this City Council to care for its people. That means City shovels in the ground now, cleaning up the Gelman contamination now.
I am announcing, right here tonight, that when I replace Eaton in that chair, I will demand an immediate, aggressive City cleanup of the Gelman contamination, and a millage vote by the people to pay for it. If we get the polluter and the state and the feds to pay us back, great.
But you cannot sit on your hands for another 30 years holding endless meetings, and making wishes for a dying EPA to save the day. When elected, I will see to it that this City Council meets its obligation to CLEAN UP THAT CONTAMINATION OF OUR WATER.
Mozhgan Savabieasfahani, PhD,
Environmental toxicologist.
Candidate for Ann Arbor City Council, Ward 4. 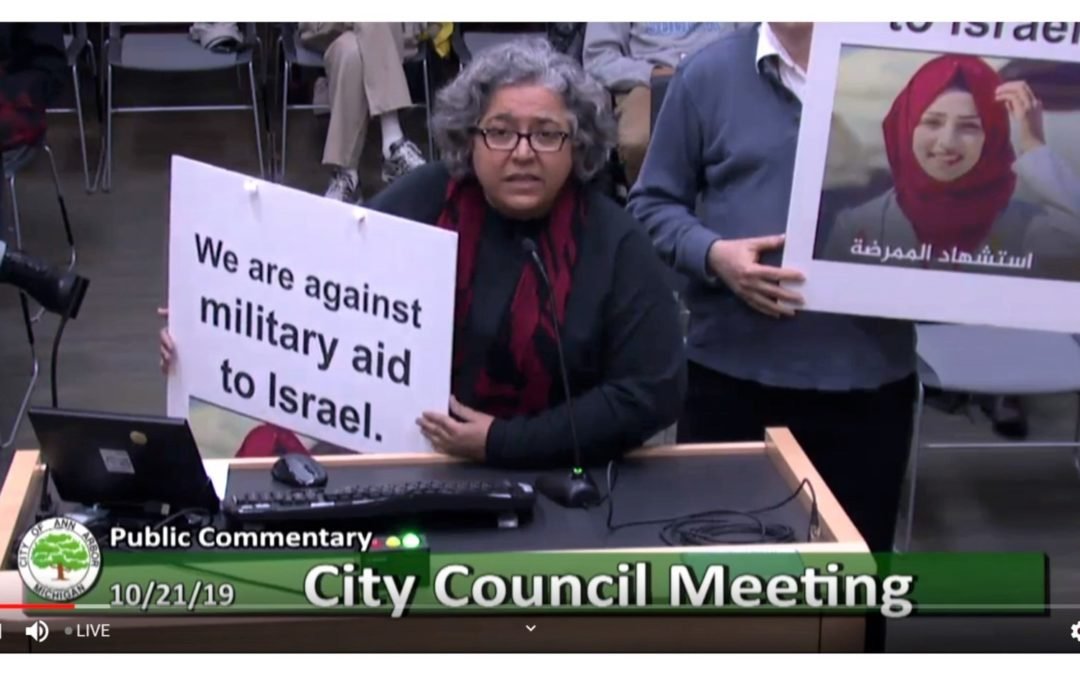 Dr. Mozhgan fights for environmental and human rights. She has long demanded an immediate city cleanup of the toxic Gelman dioxane contamination of our water, declaring that it’s time to “put the shovel to the ground and clean it up now.”